[ANSWERED] how can I reduce "assembly" and "Microsoft.NET" ?

which components must I choose, to reduce the size of the directories "assembly" and "Microsoft.NET" ?

more_horiz
Reomove net framework 4.0 could do that. But DON'T choose it or delete anything in those folders, it could cause many problems to your windows.
mrpotter2510

more_horiz
That's it. Sorry for 4.0 mistake

more_horiz
Thank you. I'll try it this evening, but I'm sure it will work fine.
caphp

more_horiz
Interesting thread. I used to remove both of the "NativeImages..." folders from my Windows 7 images, and absolutely nothing went wrong. Doing this saves like half a gigabyte at the moment of installation, and like a quarter gigabyte from the ISO itself.

I haven't tried this on a Windows 8 image, but I guess it will work too. I'm assuming you're looking at the Assembly folder with an external software like 7-Zip or UltraISO, because trying to open the Assembly folder with the Windows Explorer will show up a list of the actual assemblies, not the folders it contains. To watch the actual folders like you do with the external software, you need to apply this registry tweak to your PC:

Create a new dword key under HKLM\Software\Microsoft\Fusion\ with the name DisableCacheViewer and set its [DWORD] value to 1.

One you've done this, you should be able to see the Assembly folder like a normal folder instead of a list of inaccessible data. After this, you just mount your image using WinReducer and erase both of the folders. You do this BEFORE saving the image, and make sure you just remove the "NativeImages..." folders. DON'T TOUCH ANYTHING ELSE. All this is for reducing the Assembly folder. As for the Microsoft.NET folder, I don't know if it can be reduced

I would like you to try this and report feedback so we can know if doing so is safe for Windows 8 (as it presented no problems in Windows 7).

billybully wrote:
Interesting thread. I used to remove both of the "NativeImages..." folders from my Windows 7 images, and absolutely nothing went wrong. Doing this saves like half a gigabyte at the moment of installation, and like a quarter gigabyte from the ISO itself.

Hmmm. I never knew that one. Got any others :-)
I will have some time this weekend, so I can try it also.

Are the "NativeImages..." folders related to .NET or something else?
theKramer

more_horiz
Yes, the NativeImages* folders are belong to .Net, you can think they're some kind of .Net cache for running .Net programs, to increase performance.
You can safely remove them but they'll be recreated soon right when you run a .Net program, and you must be waiting so long to start it.

I choosed these two settings in my *.wccf file: 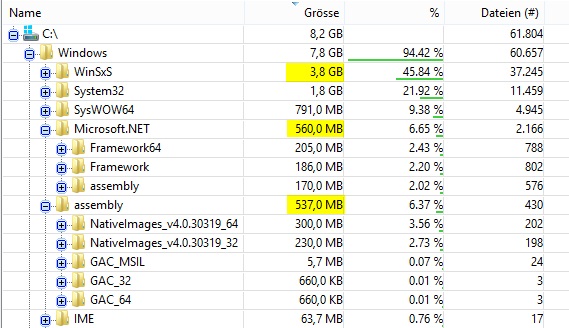 I will try to remove those "NativesImages" folders before installation as it seems to save 500Mo during installation, that could be faster (less files to install).


Congratulation for your excellent idea !!!!

And if there will be others ideas like this, I'm really interesting !

more_horiz
How much did it reduce the ISO size?
billybully

more_horiz
I will also post another screenshot with the results after installing w8.1 with beta8.
caphp

Holy crap. That's what I call a milestone!!

more_horiz
Here is the result with beta8: 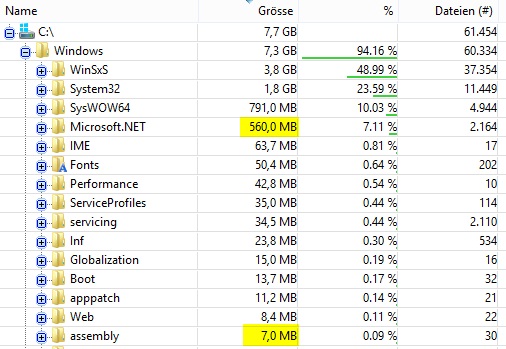 more_horiz
Thanks to you !

And good news I'm trying to remove more files in these folders ... maybe it could save around 150-200 Mo more !

more_horiz
So will this removal be an option we can select by itself, or is it lumped underneath a more general title, like "Remove Unneeded Files"?

It would be extremely helpful is some of those titles mentioned what directories they are removing, for debugging purposes, and maybe show how many megabyte they save both on iso and install.
scottallthefriends

All information are in this thread : https://forum.winreducer.net/t380-optimizations-windows-winsxs-files-cleanup-extreme

This WinReducer Component is separated from others because it's highly experimental and we don't exactly know the consequences for Net framework depending software are with other ones...
winterstorm2050Admin

more_horiz
hi friends i am beginner with this i only remove this 4.5 network services and save into wim. now i cant open install.wim with 7zip it show cant open as archive also i cant unpack this

more_horiz
What is your ambition ?
To look into a wim file you should mount it with dism.
caphp

more_horiz
i mount it but it always show me cant open

But be aware. With this removement there will be many other things, which won't work after that.
caphp

more_horiz
No idea what you are doing, but it is not possible to test this in 8 minutes

now i see on install.wim

(assembly - gacmsil is there only )
framework folder 193990MB still

so any solution how reduce this 2 folders or delete ?

more_horiz
I realize this is an old thread, but I was wondering if there has been any progress on slimming the microsoft.net folder. Winter suggested that he would look into reducing its size, but as I understand, he put it under one of the 'extreme' presets or 'experimental' options.